“Atzung & Lager”, which loosely translates to “nourishment and accommodation”, is what emperors, kings, merchants and crusaders alike were looking for in old “Bibilrith” on their strenuous travels. They rested at the hostel and later at the caravansary at an ancient traffic artery.

The ridgeway of the Franconian colonialization was later used to transport personnel and goods between Vienna and the Netherlands. Kings used it to travel from their coronation site in Frankfurt to the Reichstag in Nuremberg. Today the traffic interchange Biebelried connects the east-west highway A3 with the north-south highway A7.

On this road once stood a castle complex of the lord of Biblis, which was transferred to the Knights of St. John in 1244. The order expanded the castle between 1275 and 1284 to a fort with an area of 2000m² or around half an acre.

1469 the “Inn with tavern and farmstead” was first documented as Komtur Philipp von Reiffenberg sold the former caravansary. The inn is frequently mentioned in travel reports like the one of the painter Ludwig Richter in 1837 which reads: “in Biebelried a delightful inn…”.

Since 1892 the “Inn with tavern and farmstead” is owned and run by the Leicht family, currently in the 5th generation.

Back then as today, the main focus of the house is the well-being of the guest. The pleasant atmosphere and the unique flair do good even without strenuous travels. 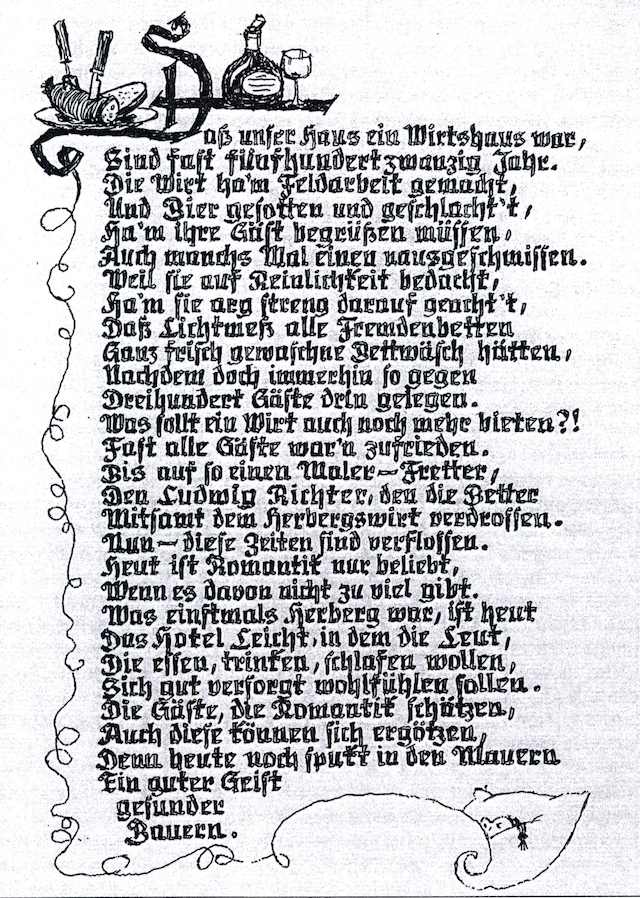 The “Blauen Zipfel” (blue ends) were first created and served in 1969 by Georg and Helga Leicht here at Hotel Leicht on the occasion of the annual meeting of the Baillage de Bavière de la Chaîne of the Rôtisseurs.

Since then the “Blauen Zipfel” have been permanently on the menu at Hotel Leicht and an established regional culinary specialty of Franconia. 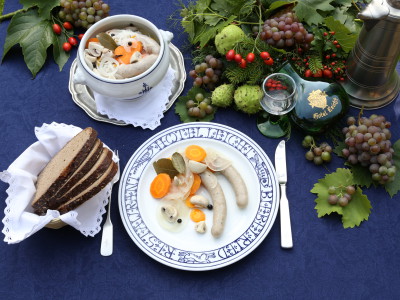 This was documented among other sources in handwritings of Georg Leicht, the patron of the house at the time.

Over the course of detailed research for the development of the European cultural pathway in Biebelried no sources prior to 1969 of the “Blauen Zipfel” could be found and verified.

The origin of the name “Blauen Zipfel” lays in its preparation, as Franconian bratwurst is cooked in a special, blue brew of root vegetables, vinegar, Franconian wine, spices, mushrooms and Kuehneromyces.

This website uses cookies to improve your experience. We'll assume you're ok with this, but you can opt-out if you wish.Accept Read More